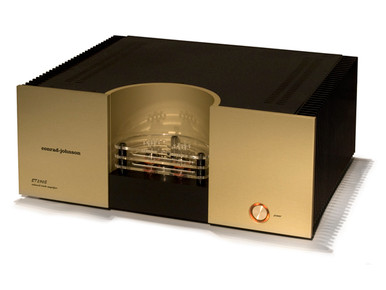 The conrad-johnson Enhanced Triode (ET) Amplifiers are power amplifiers designed to capture the best attributes of both fine vacuum-tube designs and of the best solid-state designs.

The ET250S is a 250-watt per channel stereo power amplifier

Negative feedback is an engineering technique used to reduce measured distortion. While feedback does achieve this goal, it also introduces aberrations in the tran­sient response characteristics of the circuit. We have found that eliminating loop negative feedback can result in much finer gradations in dynamic response (micro-dynamics) and more accurate decay on musical transients. But eliminating negative feedback requires much more care in the design of the circuits—both in choosing devices and in power-supply design—and places greater demands on the parts.

The Right Device for the Job.

A power amplifier has two distinctly different functions. First, a voltage gain stage must increase the amplitude of the input signal by a factor of about thirty. The distortion characteristics of the amplifier are dominated by this stage. No device is better suited to accurately amplifying signals at high amplitude than triode vacuum tubes. For our enhanced triode amplifiers, voltage gain is provided by a 6922 vacuum tube, selected for its ability to track a high amplitude signal accurately. Theory and 30 years of experience have taught us that the voltage gain stage of a power amplifier dominates the sonic character of the critical mid-range of a power amplifier, and indeed these amplifiers exhibit the smooth, lucid midrange for which tube amplifiers are so highly esteemed.

The high amplitude signal produced by the voltage gain stage must then be efficiently coupled to the loudspeaker system through an output stage to produce the power and control needed for a musically accurate response – basically to provide current gain and a low output impedance. High-current bi-polar devices have been specified for the output stages of these amplifiers, based on their extremely low output impedance and their ability to handle a great deal of current. This contributes the fast, weighty bass and seemingly limitless power reserve that are notable in these amplifiers.

Rock solid power supplies are needed to enable the audio circuits to reach their potential on musical transients. The ET amplifiers feature oversized main power transformers (so that the circuits are not starved for current), and massive power storage reservoirs with high-speed capacitor shunts to deliver quick, even startling transient response. Carefully designed DC voltage regulators isolate the critical voltage gain stages to prevent demands of the output stage from modulating the input signal.

Conrad-Johnson components are internationally known for the quality of their parts, and the ET amplifiers are no exception. The audio circuits and their related power supplies utilize precision low inductance laser-trimmed metal foil resistors. The circuits employ polypropylene, polystyrene and Teflon capacitors extensively, except in the main power supply storage, where high-speed electrolytics are used because of the extremely high capacitance required. Precision-machined input/output connectors have been carefully selected for optimal sonic performance. Even the internal wiring is chosen on the basis of its sound quality in its specific application.