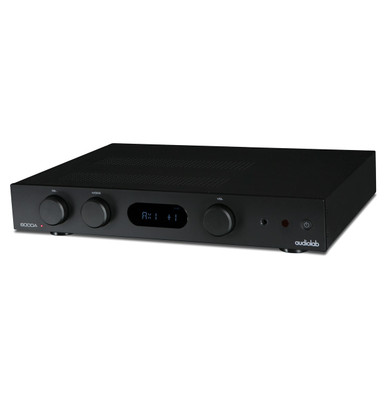 Audiolab engineers chose a high linearity Class AB output stage for the 6000A that delivers 50 Watts of clean power into any speaker load. The 6000A includes the latest in high end DACs - the ESS ES9018K2M. This revolutionary DAC operates at 32-bit level and includes an 8x digital filter and up to x256 oversampling.

The 6000A has four Analogue inputs including a dedicated phono stage for MM cartridges, as well as four digital inputs (2 x coax and 2 x optical) providing connections for CD players (for example the 6000CDT transport) and other digital sources. The coax inputs accepts signals of up to 24-bit/192kHz.

Unusual for an affordable integrated amplifier, the 6000A includes the latest, high-end in DACs; the ESS ES9018K2M. This revolutionary DAC operates at 32-bit level using 8x digital filters and offering up to x256 oversampling. Audiolab engineers have also incorporated a three digital filters (Fast, Slow, Phase) for optimum setup of your digital sources.

All input switching is handled by CMOS switches specially chosen for their transparency and ultra-low distortion. The volume control equals this transparency by using a digitally controlled, switched polysilicon precision resistor ladder with accurate, logarithmic attenuation in 0.5dB steps. With a signal to noise ratio of 127dB and unmeasurable THD, this volume control, in conjunction with the CMOS switching, ensures absolute transparency of the signal passing through the preamplifier stages.

The twin stage nature of the pre and power amplifier is accentuated by the use of separate power supplies for each stage. So the preamplifier is driven by its own dedicated transformer and rectification circuit to ensure a clean power supply to all critical circuitry. This remains unsullied by any power supply fluctuation or interference from the power amplifier which, likewise, has its own dedicated transformer and rectification power source.

Audiolab engineers have chosen a high linearity Class AB output stage for the 6000A that drives 60W of clean power into any load. The output stage features precision matched transistor pairs for zero drift in operation characteristics with temperature. Able to drive any loudspeaker load, the 6000A is a perfect match for any mixture of analogue and digital sources and will deliver its musical signal reliably to the chosen loudspeakers.