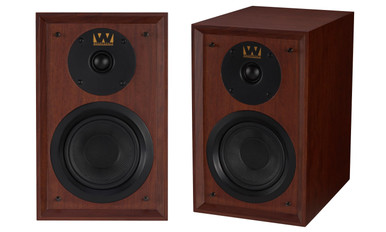 The Wharfedale Denton 85th Anniversary Edition celebrates an incredible milestone for this British brand and successfully incorporates all the elements of a 21st Century loudspeaker into a design that brims with heritage and class. If that isn't enough, their warm, rich and natural sounding character is guaranteed to win you over.
Overview

Wharfedale is proud to present this 85th Anniversary Edition of one of the brands most famous and popular loudspeakers the Denton.

Gilbert Briggs, who founded Wharfedale in 1932, turned the company into one of the most famous loudspeaker brands in the world by concentrating on quality and value for money.

The Wharfedale Denton exemplified these two edicts, balancing fine craftsmanship, natural sound quality and affordability inside a compact loudspeaker that was bought in its millions right across the globe.

The original Denton went on to further other models based on its highly popular formula, the Denton 3 being the last of the line...

These drive units are flawlessly integrated by a highly researched crossover that is near inaudible to the listener, resulting in a coherent, seamless musical output that is both thrilling and natural in its rendition of any source material.

The original Denton was well known for its warm, rich and natural sounding character and the 85th Anniversary Edition retains that character but imbues it with an open, detailed performance that will entice you to explore your whole music collection.