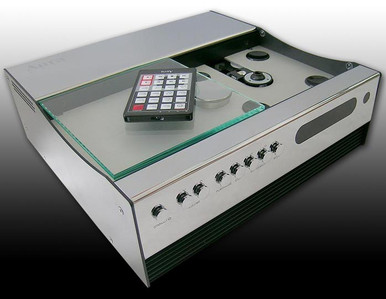 The April Music Aura Note is a credenza machine and thus ideally suited for a pair of superior monitors that will sit next to it, speaker cables hidden behind credenza and wall. It's the perfect studio, bedroom or living room solution where it's not about altars to stereo but good sound that's -- mostly -- invisible.

It's when you strap this machine to free-standing monitors set up for serious listening that you realize this machine will nearly be wasted on those who decide to park the whole lot on a book case against the wall and call it quits.

Sure, that's really the whole notion of compaction and living room happiness. Get the bloody hifi off the floor, stop wasting real estate and get on with your life. It's simply that the Aura Note is so much better. It casts the proverbial dome of sound around and behind a pair of free-space monitors if you let it. It competes with separates easily double its own sticker. It's very resolved and articulate but skillfully avoids the etched and harmonically bleached corners which especially affordable transistors can veer into. Its CD performance alone is worth between $1,500 to $2,000. How expensive, exactly, should we then call just the amplifier inside this CD receiver with USB DAC and USB out?

I have no idea how to answer that. It's not often that I come up short on words. Let just say that even listeners accustomed to truly fine fi are bound to scratch their heads when they take a tour with this machine strapped to high-performance two-ways of appropriate specs. In our household, the nearly trickest feature of this whole Aura deal was the USB input to watch movies from a laptop. Removing the computer leaves you with a great one-box music system afterwards. Even audiophile purists who'd never let anything video-related into their sound shrines could loosen up and get converted. Of course such purists likely won't take this machine serious enough to build a system around.

The long and short of it is, should any of my family members ever ask me for an audio recommendation -- they probably never would based on wicked assumptions about complexity and cost based on my hi-end reviewing gig and personal audio belongings -- I'd point 'em at the Aura Note. Even if all you did with it was have it sit on your night stand with a pair of 'phones jacked in, you'd still get your money's worth. That math works